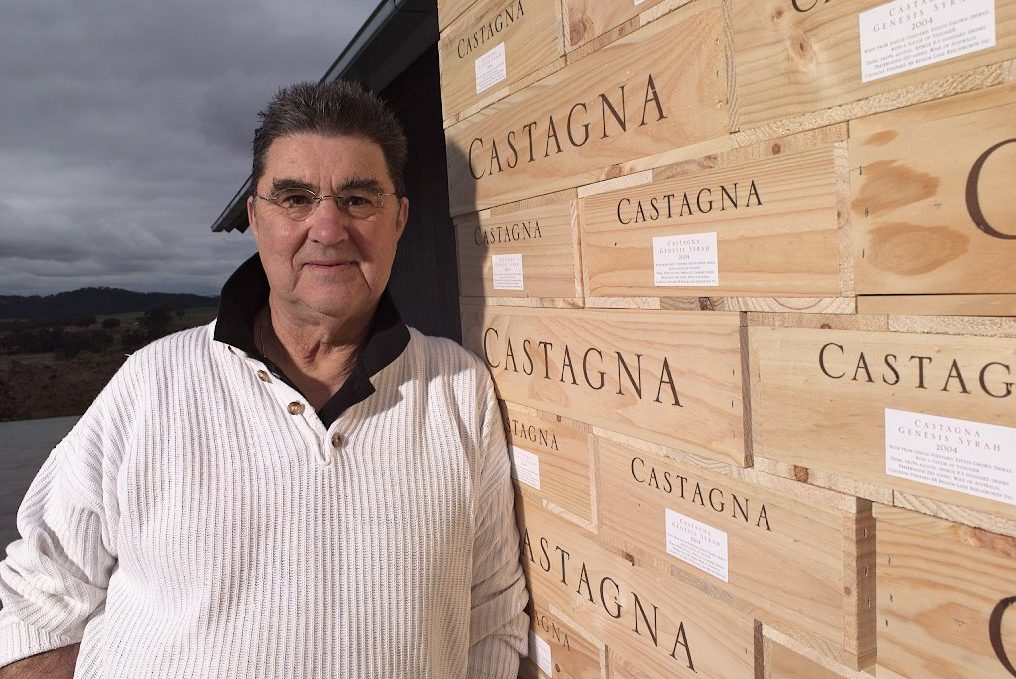 It would be hard to pigeonhole Julian Castagna.

Is he a maverick? Yes, there’s certainly a bit of the maverick in him.

Is he a renegade? Not really, but there’s a certain spirit of individualism about the man.

Everything I make is done with a view to how it goes with food. Australian food made with Asian spices works especially well with our wines.” – Julian Castagna

There is also a streak of brilliance there. Certainly, a determined nature. He’s a man of his convictions. He does things his own way and doesn’t swim with the general wine industry tide.

He would snort at the very suggestion of a pigeonhole. To pigeonhole people is to stifle their creative spark.

We shouldn’t even seek to pigeonhole people like Julian. A creative person by nature, he began his working life in cinema, making documentaries, directing films and advertising. A worldly chap, he was born in Italy and worked in England, Spain and other countries, then Sydney became his home. In 1996 he and his wife Carolann made a total U-turn in their lives, left the bright city lights for bucolic Beechworth where they bought land and planted vines. Julian had picked up some experience working in other people’s wineries.

Early in the piece, he encountered biodynamics, and became a devotee of that rarefied school. He befriended Nicolas Joly, of Savennières in France’s Loire Valley, the guru of biodynamic viticulture.

Castagna is not short on self-belief, and having made his bed, he’s committed himself to lying in it, come hell or high water. Or in Beechworth’s case, drought and heatwave and bushfire smoke.

Somehow, against all adversities, he’s managed to continue making excellent wine—not only excellent, but interesting wine, a much more difficult task. But Castagna was never going to produce wine that tasted like other people’s. He wouldn’t see any point in that.

Having Italian heritage, Castagna didn’t take long to progress from the Beechworth regional specialties chardonnay, pinot noir and shiraz to the Italian red grapes—but generally not mono-varietals. He makes a fascinating and complementary Tuscan-inspired pair: Un Segreto 2018 is 60% sangiovese and 40% shiraz; La Chiave 2018 is 100% sangiovese. They are line-priced, but where Un Segreto has some of the fullness of shiraz it is undeniably driven by the sangiovese. La Chiave is leaner, more savoury and more rangy, like a high-end Chianti.

Genesis is the hero wine of Castagna, created at a time when many Australians were experimenting with a smidgin of viognier in their shiraz, but, unlike most, Castagna stuck with it. The 2018 has just 2% viognier, but it’s an important 2%. “It brings out the flavours that are hidden, like salt and pepper on food,” he says. It also includes a proportion of whole bunches in the fermentation, as do most Castagna red wines. 2018 was a hot year in Beechworth, but “we picked early because of the heat”, and the finished wine has a respectable alcohol of 14%. The two sangiovese styles both have a modest 13.5%.

To be predictable is not in Julian’s nature. Castagna’s ‘second’ label, if that is not too demeaning a description, is named Adam’s Rib (Adam is his eldest son, who is also fulltime in the wine business, but one also senses a double entendre), and Adam’s Rib The Red 2019 consists of 70% nebbiolo and 30% shiraz.

“It’s our middle of the road wine,” says Castagna.

“We shouldn’t be using Barolo as a benchmark in Australia. We model this on pinot noir.”

I think by middle of the road he’s not saying it’s a lesser wine, more that it’s a wine with wide appeal, for early drinking. That said, it’s also a savoury (as opposed to grapy), minerally style which comes into its own with food.

“Everything I make is done with a view to how it goes with food. Australian food made with Asian spices works especially well with our wines.”

There’s much more to the Castagna oeuvre. Spicy, creamy chardonnay blended with 20% viognier under the Adam’s Rib label; a left-field skins-fermented riesling named Quasibianco under the Growers’ Selection label; tasty and structured roussanne from the nearby Indigo vineyard again under the Growers’ Selection label; a barrel-fermented rosé named Allegro made from shiraz with a smidgin of viognier; and sparkling versions of both Genesis and Allegro. The 2015 Sparkling Genesis has no dosage at all: it’s the same wine as the still red wine, but with bubbles and extra age. An unusual and special exercise in balance without sweetness.

It may not be that significant, but while Australia’s wine industry has headed holus bolus down the screwcap path, Castagna wines are all closed with Diam technical corks.

Castagna wine, like its maker, is different and distinctive. Anything but follow-the-mob.