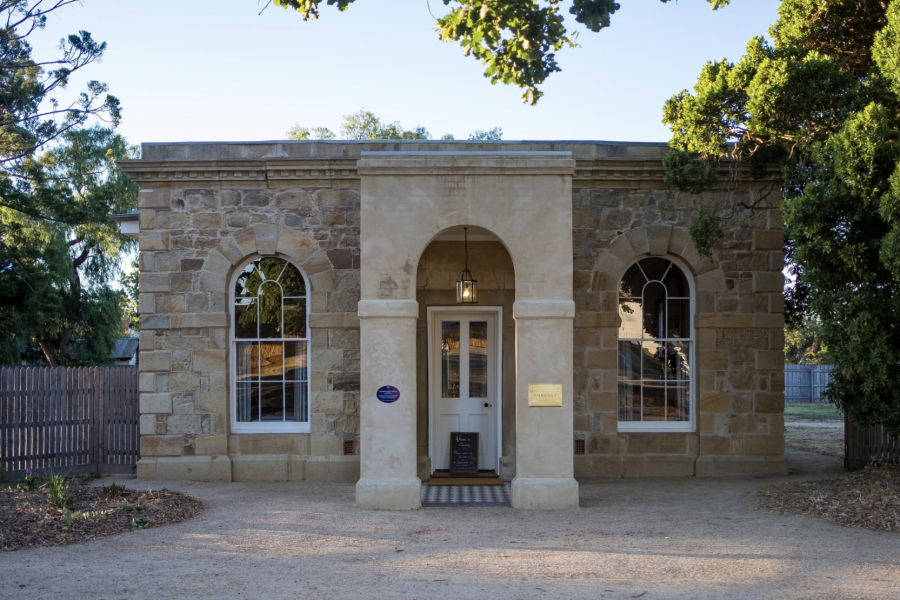 This is good news story, about a piece of valuable heritage that could have been destroyed but was saved by smart thinking, persistence… and a bit of cash.

The restaurant opened with French chef Louis Naepels and his wife Tess Murray, a sommelier, both of them experienced in high-end Melbourne restaurants.

Chauncy is a name that means something in Heathcote. It’s the name of an early surveyor of the area. His name is on a street, a classic Georgian building, and now a stylish restaurant.

Elva Laughton of Jasper Hill winery tells the story of how she and her husband Ron bought and restored Philip Chauncy’s 1854 heritage-listed sandstone office building and turned it into a fine dining restaurant with a top-level French chef.

“One day about five years ago Ron walked into the newsagent’s to buy the paper. The newsagent was also the selling agent for the property in Chauncy Street, and he said ‘I’ve got just the house for you to buy’.

“We weren’t looking to buy anything, but there have been beautiful vintage buildings that have come down in the main street of Heathcote, and we didn’t want this to be another one. It was a philanthropic thing. We found out later that it would have been demolished for town houses.”

Evidently, there were some hoops to jump through as the building is heritage listed.

Five years later, on December 7 last year, the restaurant opened with French chef Louis Naepels and his wife Tess Murray, a sommelier, both of them experienced in high-end Melbourne restaurants. Louis worked in Michelin starred restaurants in France and was head chef at Grossi Florentino, Tess was sommelier at Supernormal.

They lease the building from the Laughtons.

So Heathcote has at last got a smart restaurant to go with its fine wines. Chauncy is on the corner of High Street and Chauncy Street, Heathcote.

One thought on “Smart new restaurant opens in Heathcote”