The first few years of Fix 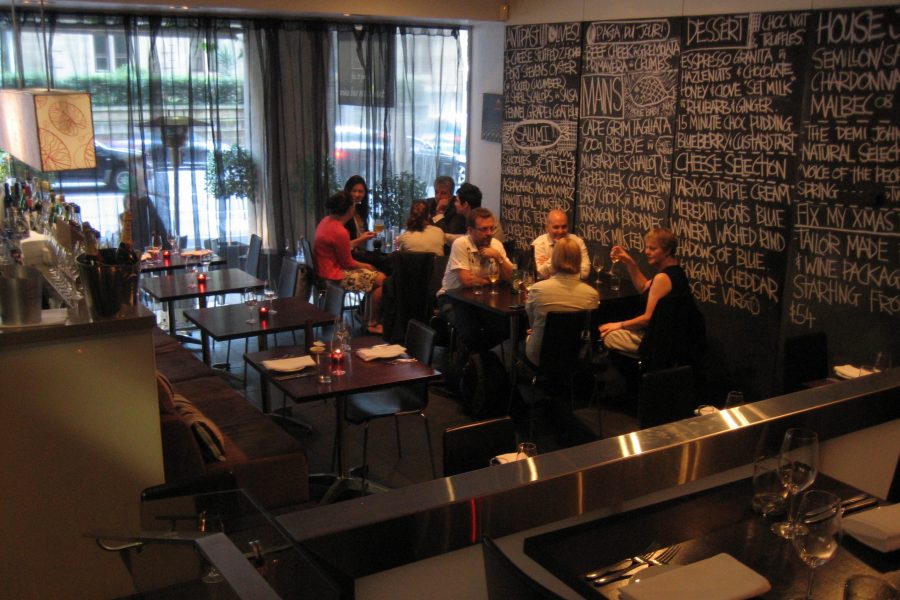 Earlier this year I penned (or whatever we call it these days) a couple of pieces about my journey to opening Fix Wine Bar + Restaurant so, with the end of the year looming I thought I would return to this winding tale.

As I mentioned previously, our first event was to launch the Taste 2007 book written by Matthew Jukes and Tyson Stelzer. It was a wonderful way to get a restaurant started, with lots of friendly faces and a good list of the important food and wine journalists of the day so we hit the ground, maybe not running, but at least walking with pace.

There’s no argument that I was very green around the gills when it came to opening a new venue, particularly one that was going off in a different direction to what Sydney had at the time.

There’s no argument that I was very green around the gills when it came to opening a new venue, particularly one that was going off in a different direction to what Sydney had at the time. My head chef and I came up with a unique concept around building a menu that most dishes were available in multiple sizes. You could order a snack, entrée or main portion of many items. But we decided to call them piccolo, medio and grande instead. Which basically meant total confusion for the customer for months and months trying to work out what they wanted.

All the while I had built a reasonable list of wines that no one had ever heard of, this meant we really had to talk everyone through the choices available. If I was to offer that list now it would seem quite pedestrian but at the time the great wine lists were reserved for the hatted venues, so we had many complaints of “I don’t know any of these wines” and often ended up not selling them any wine at all.

The other major flaw in my opening was our name. Originally we were Fix St James (and still often described as such). The name came from my other café Fix @ Castlereagh, however during the chaos of building and so on I authorised the proofing of our logo and completely missed the fact the @ was missing. Once I realised it we were way too far down the path to stick it back in but I didn’t mind it. Problematically though our name didn’t describe us at all. No one walking by had any idea what we were, a café, a sandwich shop, a bar or any number of other things that have been asked. In the customer’s defence, we were not quite sure to start with either.

The saving grace for Fix was lunch, in the CBD it is always the key service, and we were lucky enough to be located close to the legal precinct. To this day the law is a large part of our clientele, back then it was probably 90%. Over the years we built a great community of solicitors, barristers and judges that have continued to not only return but introduce the next generation to the place. Our biggest challenge when we opened, and we are re-living it now post COVID, is enticing people to stay around after work in the city.

As time went on, we settled into a decent groove, I still believed “if we build it, they will come” and that is one thing I wish I could change. PR and marketing is definitely something that is critical to a new restaurant’s survival. We got lucky with a visit from Simon Thomsen, food reviewer for The Sydney Morning Herald.

Back in those days, a review wasn’t completed on the opening night but amassed over a few visits once a venue had found its feet somewhat. I still have a flutter of nerves when a food reviewer walks in, but the night Simon arrived, there was a full jungle of butterflies tearing around my stomach. He was kind, we scored well with some gentle criticisms, and we saw a lovely uptick in patronage. I felt the greatest compliment of all was he recommended that his wife Sally visit with her friends as well.

As things happen, my original chef and I had a disagreement and parted ways in the lead up to the next festive season. It wasn’t pretty but I was very fortunate to have a solid kitchen team who were prepared to step up and keep things going while I scrambled to find a replacement.

Every cloud has a silver lining, through the network of hospo I found our new head chef, Sam Bennett, whose sister had worked with me at Level 41. At the time, he was sous chef at Glebe Point Diner and they were hot in the food scene at the time. Sam came in with a bravado that was matched with an epic palate and brilliant ability to make everything bloody messy yet so packed with flavour and balance. In my years I’ve never seen anyone else quite like him in the kitchen.

At that point, we threw out the multiple sized dishes concept and returned to a much more classic format. But written large on a blackboard. One whole wall dedicated to it. Fortunately, his handwriting was legible and full of character. Mine would make a GP blush! Flank steak and chips, slow roast pork and panzanella salads filled the menu, and we took everything up another gear.

Social media started to be a thing and I signed up for this thing called Twitter. All of a sudden I could speak to hundreds of like-minded people about what we did, what I liked and electronic conversations went late into the night.

The saving grace for Fix was lunch, in the CBD it is always the key service, and we were lucky enough to be located close to the legal precinct.

I recall one evening, sitting at home with my wife and lazily scrolling through the Twitter feed when I hit a tweet from Pat Nourse, who was Gourmet Traveller food critic at the time, saying, “Flank Steak & Chips, I’ll be back for you my pretty” with us mentioned. He’d read the menu walking past. To say I panicked wouldn’t quite explain the level of chaos that ensued from one tweet. It rolled on to a tiny little bistro/wine bar on Elizabeth Street getting a full review and so on in the glossy pages of Gourmet Traveller. Still one of the highlights of my journey so far.

At the same time, Time Out had recently been launched and we hit the radar there as well. Myffy Rigby took that same flank steak to new heights with the award for ‘Best Steak’ in their inaugural food awards. I suspect some fancier restaurants may have felt a little robbed at this point. The following year, with a heavily backed Twitter campaign, I saw the next level of social media influence, with us taking out the Time Out People’s Choice award.

It certainly wasn’t all roses at the time though. Throughout this period, we were in the grip of the Global Financial Crisis (GFC) and we really did struggle to make it through, even with such positive press around us. By the start of 2010, though, we had started to really carve a proper niche in the Sydney dining scene.

I’m going to leave you here, as 2010 is a year that probably deserves its own article but at the very least, more room than I have to spare now. Thank you for being part of this journey and look forward to filling in more details in 2022.