Getting wild with ferments 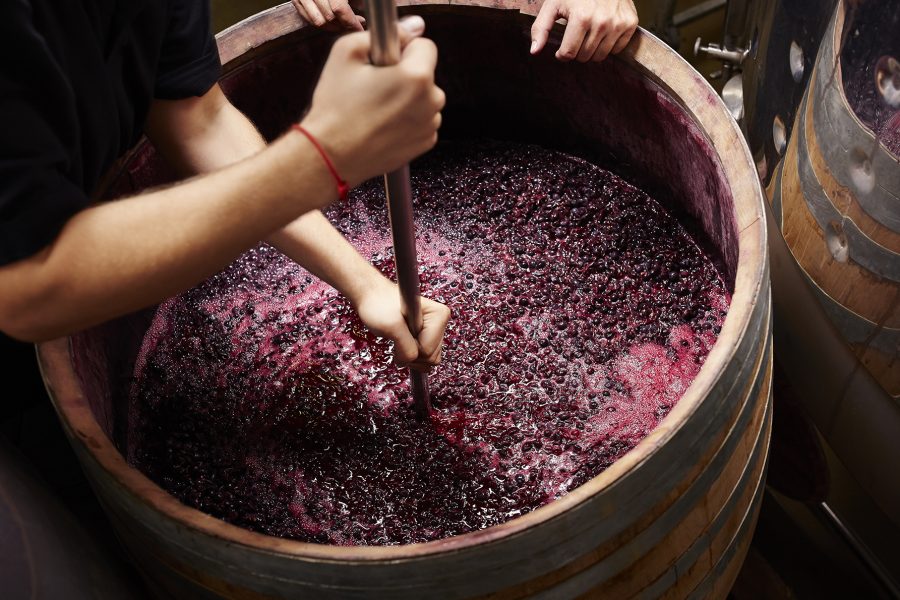 Before the industrialisation of wine, all wine was fermented by ‘wild’ yeasts. Science How Stuff Works website

These are some of the terms used on wine labels and in winery PR today.

Aside from giving the impression of naturalness, there are perceived benefits of wild fermentation for the taste of wine—flavour and textural benefits.

There is value in being seen to be close to nature. Flagging natural fermentations is part of that trend. It’s just one way to signal that your winery is doing things more naturally, with the implication that it’s environmentally responsible.

In fact, before the industrialisation of wine, all wine was fermented by ‘wild’ yeasts. There was no such thing as cultured yeast, let alone powdered yeast that could be added from a packet.

All of the above terms signify wine that has been fermented by yeasts that occur naturally in the air, the vineyard and the winery. They’re all around us, all the time, invisible to the naked eye. You’re breathing them in right now.

Grapes or juice left unattended for long enough will ferment spontaneously, thanks to these omnipresent creatures. In the open air, they won’t create much alcohol, if any: wine (and beer) fermentations are anaerobic, because yeasts produce alcohol when starved for oxygen. The main winemaking yeast is the same one that’s used by bakers to raise their bread dough: Saccharomyces cerevisiae. The fermentation that raises bread dough doesn’t result in alcohol because it’s aerobic.

Aside from giving the impression of naturalness, there are perceived benefits of wild fermentation for the taste of wine—flavour and textural benefits. Plus the winemaker saves money by not having to buy yeast.

The following text was delivered at an Australian Wine Industry Technical Conference wild fermentation workshop, at which I was one of several speakers, including Yalumba’s chief winemaker, Louisa Rose, an arch-proponent of wild ferments.

Yeast. It’s in your gut, up your nose, under your arms, between your legs, in your Vegemite and your bread and your Coopers Sparkling Ale – you can’t avoid the stuff.

If we sampled a cubic metre of this air we’d probably find at least 50 species of yeast in it.

Kurt Vonnegut, in his novel “Breakfast of Champions”, imagined a conversation between two pieces of yeast. These two yeast cells were discussing the meaning of life as they ate sugar and suffocated in their own excrement, quite oblivious to the fact that they were making Champagne…”

It’s an existential story worthy of Sartre. And it’s what most of the people in this room do for a living: forcing some poor, unfortunate, invisible to the naked eye, but nevertheless living creatures to ferment, to create something beautiful even as that very act of creation kills them. Fermentation is murder in the name of art.

Compared to the long history of wine, it’s not that long ago ambient yeasts were the only yeasts that conducted wine fermentations. In our ever-optimistic and ego-centric belief that we can improve on nature, we’ve engineered yeasts to do what we wanted them to do.

So people of my generation were educated at wine colleges in the early 1980s with scarcely a mention that there was any other way to make wine than to inoculate the juice with a strain of active yeast propagated up in tanks of starter-culture, and later, dried yeasts sprinkled from packets and tins.

Then a few brave souls started to copy what they saw in France, and experimented with so-called wild yeasts. To these brave pioneers, it was as though allowing ambient yeasts to conduct fermentations had never been thought of before.

It was soon pointed out by some spoilsport with a microscope that some of these supposedly wild yeasts were actually the same yeasts which had been introduced by winemakers during all of the previous vintages. This caused some consternation.

But yes, wild fermentations used to be the norm, but some time after the age of enlightenment dawned when man thrust himself in the centre of the universe, pushing nature rudely out of the frame, bakers and brewers started to cultivate yeasts, harvesting, selecting and storing them so as to reintroduce them to their brewing or baking, in order to control the fermentation and have a more predictable, less-random, outcome. Winemakers joined them. In some ways, this was arguably a retrograde era when predictability and standardisation – the catch-cries of mass-production – were valued at the expense of difference and interest, when character was sacrificed for “quality”. Today, however, the smelly, yeast-colonised boot is on the other foot.

I think it is amusing that opinions differ so much in this country as to the benefits of wild fermentation. In one region, Margaret River, two of the leading winemakers, at Cullen and Moss Wood, have widely divergent views. Vanya Cullen is one of this country’s keenest advocates for wild fermentations, and practises it on all of her wines.

Down the road at Moss Wood, Keith Mugford has tried wild ferments and abandoned them. He didn’t like what he tasted.

I asked Vanya Cullen why she does wild ferments exclusively – in chardonnay since 1996 and all her other wines since about 2006.

She replied, and I quote: “Trials comparing wild and inoculated (ferments) showed wild-yeast ferments have superior mouth-feel, (superior) length and are more interesting.”

She says the yeast populations change every year.

She says the AWRI found 1,000 different strains of saccharomyces yeast on the Cullen property, vineyard and winery.

She summed up by saying: “People often say that wild (yeasts) are just the yeasts left over from when we inoculated. We don’t believe that at all.”

Compare that with Keith Mugford’s experience at Moss Wood: In 1999 and 2000 he experimented with wild ferments on all his grape varieties.

I quote: “The problems were many. Of all the ferments we did, roughly 80% went through without incident, a further 10% were difficult but ultimately acceptable. The remaining 10% were fraught with difficulty.

We had to deal with numerous restarts, all time-consuming and difficult. There were also greater than normal problems with sulphide and volatile acidity. Finally, even on the best ferments, levels of residual sugar were often worryingly high.” (and this was at the time when everyone was worried about Brettanomyces and residual sugar in reds).

However, Keith remains of the opinion that wild ferments enhance good chardonnay and pinot noir especially in Burgundy. But he adds that even these wines often show the “typical” problems.

Perhaps these opposing views reflect the personalities of the people as much as anything. Keith might be described as a quite technical guy. He has strong views opposing the so-called “natural wine movement.” Perhaps he gave up too easily. Vanya is a back-to-nature girl, a leading biodynamics advocate, who would probably be willing to make more sacrifices than most winemakers to follow her philosophical path. She’d be likely to make a special effort to make wild ferments work.

The usual responses to that question are, firstly, added complexity of flavour and aroma. Secondly, enhanced texture and length.

I do find however that winemakers are not very articulate in describing just how these enhancements manifest themselves. Several tell me that it’s easier to say that they like the effects of wild ferments, than it is to identify wines that have been fermented this way in a blind tasting.

I often note a particular characteristic when I’m tasting a wine and find out later that it was a wild ferment. It’s what I call ‘Balsamic’, as it reminds me of balsamic vinegar. It’s not necessarily an indication of high VA – nor sweetness – but it seems to share some of the aromatic components of balsamic vinegar. And it’s enjoyable.

Could this be associated with the volatile effects that Keith Mugford so disliked, I wonder?

What do I think of wild ferments? Like most winemakers I speak to, I’m not confident I can always pick wild-ferment wines when tasting. And it is difficult to describe their differences with descriptors. I haven’t had the benefit of tasting blind trials, as some of you would have.

But I think wild ferments are part of a suite of changes that have improved wines (especially whites) enormously in recent years. In the 1970s and 80s, at the height of the manipulative winemaking era, white juices were likely to be highly clarified either by cold-settling, earth filtration or even centrifuging, so that there were very few solids remaining; then that juice was cold-fermented with a selected yeast culture, acid adjusted – often excessively – protected from air at every turn, and what resulted was a clinical wine with fresh aromatics, spring-watery lightness and freshness on the palate but lacking texture; often austere and even hard, lacking the softness and mouth-feel that consumers enjoy in wine. If you superimposed onto all of that, the often-excessive use of oak, you ended up with unattractive and unnatural-tasting wine. It tasted contrived. The opposite of ‘natural’.

These days we are more likely to see less-highly clarified juices, fermented wild, with little or no acid addition, and given post-fermentation yeast lees contact, with or without stirring. This suite of techniques is more likely to result in a wine of softness and texture and harmony, a wine that people will enjoy drinking. In summary: it’s not just wild ferments that are responsible for these improvements, but wild ferments are part of a suite of techniques which are vastly improving our white wines.

Vanya’s comment about terroir is interesting, because the leading so-called ‘natural’ winemakers of Italy and their accolytes insist wild ferments are the starting point. One of their holy tenets. They say flatly that you cannot express terroir, nor claim to be making wine naturally, if you inoculate.

The research findings of microbiologist Dr Matthew Goddard in New Zealand, in collaboration with one of the finest winemaker exponents of wild ferments in the New World, Michael Brajkovich of Kumeu River winery, and published in 2011, are fascinating.

In a nutshell, the research showed that the yeast species that conducted fermentations varied from place to place depending on the plant species and geology of those places.

Goddard also found New Zealand’s yeast populations are different from the rest of the world’s. And also that the Kumeu River winery did not contain any saccharomyces yeasts prior to the harvest being brought in – perhaps disproving the theory that wild ferments are finished by resident saccharomyces strains. It was the yeasts that came in with the grapes that conducted the ferments.

If yeasts are as territorial as that, then the claim that yeasts are a critical part of the terroir is given further credibility. It lends weight to the anecdotal claims by many advocates that wines fermented by ambient yeasts more faithfully communicate a “sense of place”. This sense of place, this individuality, this singularity is one of the most talked-about and prized aspects of wine today.

Uniqueness is an over-used word. But it is something all fine-wine producers aspire to. To bring into being a wine of not only beauty and deliciousness, but a personality which is uncopyable. It’s the holy grail of our times.

2 thoughts on “Getting wild with ferments”