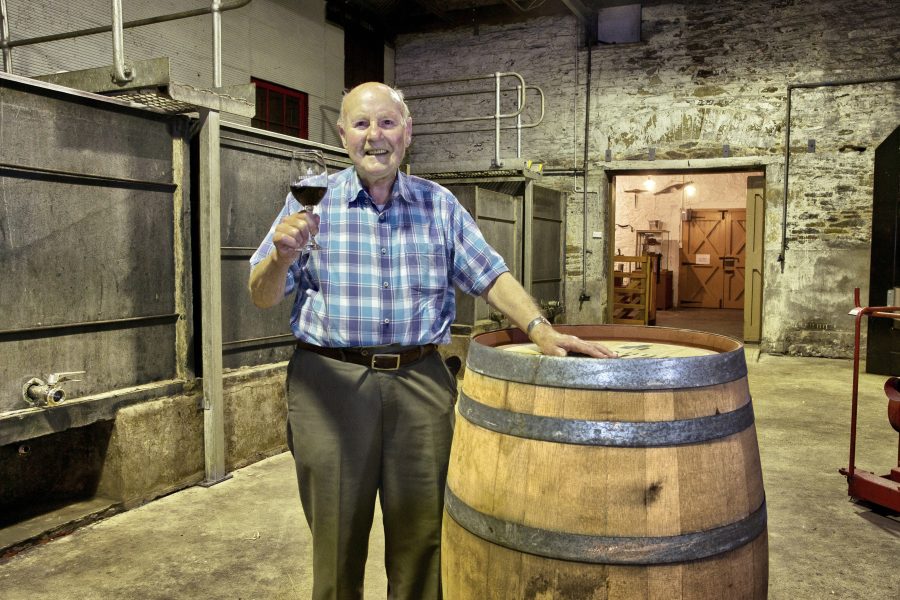 Sevenhill winery’s 170th anniversary was celebrated with a weekend of festivities on September 18-19. Unfortunately, COVID-19 travel restrictions prevented many from interstate attending.

Sevenhill is the winery and vineyard which, together with the St Aloysius Church, was established by the Jesuits in 1851 to produce sacramental wine. It was the first winery in the Clare Valley.

“What he would have been most proud of is what he did for the local community. John May was a great man, one of the truly great gentlemen of the Australian wine industry and community, who will be sorely missed.”- Jonathan O’Neill

Sadly, just a few weeks earlier, the property’s former long-serving winemaker and a much-loved character in the Clare Valley, Brother John May SJ AM, died at the age of 92.

Br May was the seventh Jesuit winemaker at Sevenhill Cellars, from 1972 until his retirement from full-time work in 2003. He died on August 18.

“Brother John May was such a wonderful man who had such a warm heart and did so much for the community. He loved the Clare Valley and its people. We will miss him dearly!”

The winery was established is 1851 by the Society of Jesus, a Catholic religious order commonly known as the Jesuits.

“John was so committed as a Jesuit to his mission in winemaking, which was unexpectedly entrusted to him.”

Born in Sydney in 1929, Br John began his vocation as an altar boy at the Jesuit-run St Mary’s Church, North Sydney.

“After finishing school, he took up a carpentry and joinery apprenticeship. Following work in the building industry, he joined the Jesuits in 1949 at Loyola College, Watsonia in Victoria. He spent the next 14 years there, performing various tasks and learning new skills through the Royal Melbourne Institute of Technology.

“His first assignment to the Jesuit winery at Sevenhill began in 1963, when he was sent to work with Br John Hanlon SJ. He was there for seven years.

“It was Br Hanlon’s sudden death in 1972 that led to Br John’s recall to Sevenhill. After arriving, he asked that the interim appointment be made permanent to ensure the winery would survive. Returning to Sevenhill as winemaker, without qualifications, he relied on his gifts with his hands and the fact that, in his words, he had spent his previous period there ‘with eyes and ears open’.

“Over time he took courses in laboratory and cellar procedures at winemaking schools and was generously assisted by the local community of winemakers in the Clare Valley as he honed the craft.

“Br John led the expansion of the Sevenhill vineyards, using the best clones of varieties suitable to the Clare Valley, and production grew from 80 tonnes to 500 tonnes a year by 1990.

“Sevenhill’s sacramental wine distribution expanded across Australia to countries throughout South-East Asia. The range of table wines was developed, and a cellar door established, attracting up to 40,000 visitors a year.

“This service to winemaking and the local community has been widely recognised.

“Br John was inducted into the Clare Valley Hall of Fame in 2014 and received a Member of the Order of Australia (AM) in 2016. He became a lifetime member of the Winemakers Federation of Australia in 2004, which is now called Australian Grape and Wine.”

After retiring from full-time winemaking, Br John could be relied upon to prepare morning tea for the winery staff, to continue his care for St Aloysius’ Church, which is on the Sevenhill site, and to offer tours to visitors around the property.

“Along with his deep faith, it was his engagement with community that was most important to him,” O’Neill said.

“What he would have been most proud of is what he did for the local community. John May was a great man, one of the truly great gentlemen of the Australian wine industry and community, who will be sorely missed.”