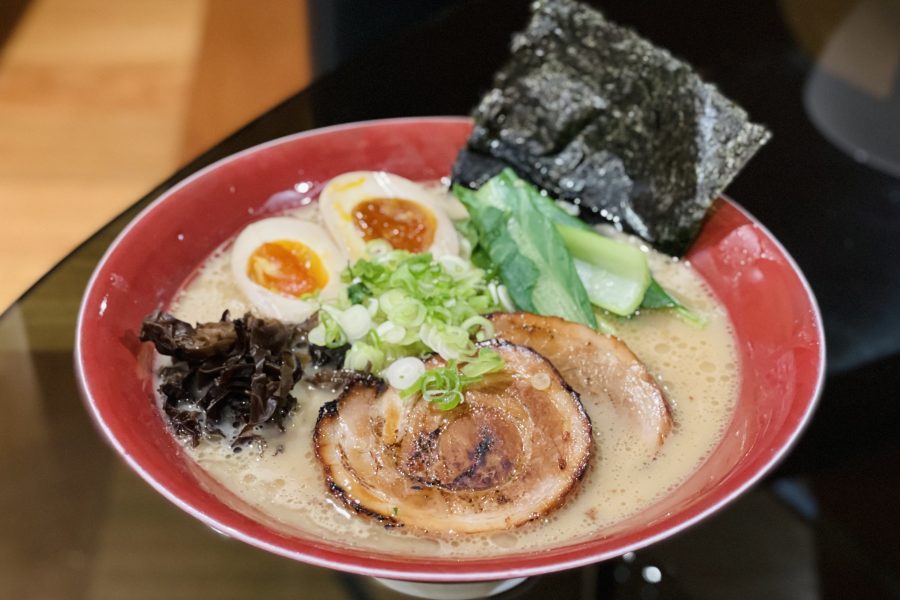 The tonkotsu ramen. The Real Review

The near-cultish Japanese dish ramen is swoon-worthy: it’s umami turned up to the max. The Japanese expression for delicious, oishi, even sounds delicious, and ‘ramen’ sort of rhymes with ‘aaagh!’

A nice mature cabernet sauvignon is likewise delightful, but perhaps not at the same meal table as ramen.

Surprisingly the cabernet that went best was the oldest. The 1974 Mildara was, somewhat remarkably, still drinking well.

Due to imperfect timing, International Cabernet Day at my place coincided with feasting on a classic tonkotsu ramen noodle dish.

As you know, cabernet can be one of the most astringent red wines and most full-bodied, and you have to be careful matching it with food when it’s young, as it easily overpowers many things. Much better when it’s mature: I had two 30-year-olds (Wynns Coonawarra Estate Black Label and Penfolds Bin 407 cabernets from 1991) and a very old Coonawarra that nobody expected to be still potable: Mildara 1974, from a wet and miserably mouldy vintage – one of South Australia’s most regretted in living memory.

The dish probably required a pinot noir, and a lighter-bodied one at that. However, the wines were quite acceptable. Unlike humans, red wines tend to lighten with age.

The dish was sublime. It was based on a broth made by simmering pork bones (tonkotsu) for 18 hours, to produce a silken texture as well as great flavour. Into this was mixed some spring onion oil and a salty sauce called tare. The freshly made wheat noodles were cooked for one minute in boiling water, then added to deep bowls of the hot broth.

Then six toppings were placed separately in each bowl. Handfuls of choy sum, chopped and blanched; wood ear fungus; sheets of dried nori were slid down the sides of the bowls, half in and half out of the broth; soft boiled eggs that had been marinated in soy sauce and mirin were halved and placed in the dish; a handful of chopped spring onions; and finally, two fat slices of chashu—roasted, rolled pork belly. The fireworks were ready to begin.

In Japan, you would probably sip a Japanese beer or a tumbler of sake with this dish. Or nothing at all. There’s no shortage of liquid, after all.

Surprisingly the cabernet that went best was the oldest. The 1974 Mildara was, somewhat remarkably, still drinking well. It hadn’t fallen apart. There was virtually no ullage, the cork had held and there was no sign of leakage – all good early indications.

Very old Coonawarra cabernet can take on an almost brothy, beef-stock character, umami-like, and so it was with the Mildara. Its bouquet showed no sign of greenness, which we might expect in an off-year wine, so I deduced that the grapes had been harvested before the rain. I recalled that Redman also made superb red wines in 1974, in the low-alcohol, early-harvested style preferred by Owen Redman, who was running the place then.

The Penfolds was musty, badly cork-tainted, although you could see that the wine underneath was very good. The 1991 Wynns was excellent, as it always is, although Black Label these days is less leafy than it used to be in those days.

However, the star of the event was the tonkotsu ramen!

One thought on “Matching ramen with wine”