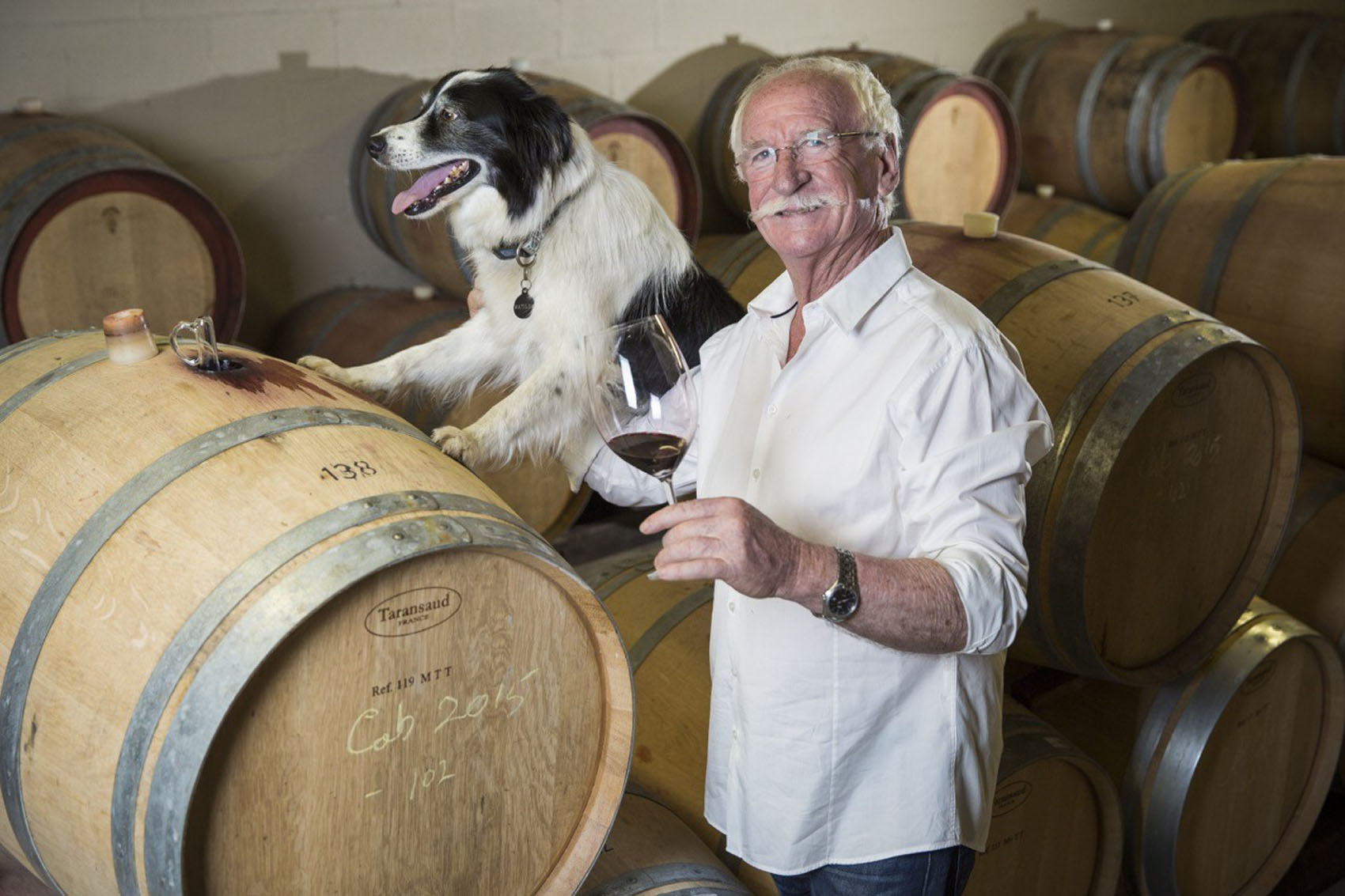 Ken Helm and friend in the barrel room. Canberra Region

The irony is not lost on Helm. “They’d sit in there and sign the pledge,” he says.

“The Canberra District might produce less than 1% of Australia’s wine but it’s the second most important wine region in NSW, and it’s all based on the quality of the wines.” – Ken Helm

They’d be horrified if they came back and saw the thriving wine industry that’s grown up in their neighbourhood. The Helm tasting room is a former schoolhouse, a tiny wooden structure accommodating a maximum 20 pupils, built in 1888, which operated as Toual Public School till 1940. Its bell features on the Helm label.

The Methodist attitude also permeated the farmers of the district, who were famous for their fine wool and resisted the wine industry in its infancy.

“Newcomers were not welcome,” says Helm. “The Yass Shire wasn’t keen to have wineries. They’d say ‘This is the fine wool hub of the world!’ They wouldn’t even let us put signs on the roadside.”

“Today,” says the 76-year-old stalwart of the Canberra District wine industry, “wine is the most important industry in the Yass Shire. It employs more people and generates more income than anything else. It’s come a long way in a short time. The Canberra District might produce less than 1% of Australia’s wine but it’s the second most important wine region in NSW, and it’s all based on the quality of the wines.”

Apart from establishing an important wine brand with 10 hectares of vineyards in three sites (two leased, one owned), and two wineries, Helm and his wife Judith have produced two daughters and a son who are all involved in some way in the hospitality business. Daughter Stephanie and her husband Ben have their own wine business, The Vintner’s Daughter, also in the Canberra District.

“They’ve done it all themselves,” says an admiring father. “Steph previously studied law at ANU, and she’ll finish her winemaking degree this year.”

Ken Helm AM has been an indefatigable champion for the district, for wine and for riesling.

Ben manages the vineyards and the Helm winery. Natalie studied political science and now works in marketing for Coca-Cola. She is the unofficial PR person and helps out during vintage and at the cellar door. Matthew is a chef who has cooked all over the world in some famous kitchens and now lives and works in Macau.

Ken was almost fated to become a winemaker. He was born and raised in Albury, where his father had a bicycle shop in the main street, he grew up around the vineyards of Rutherglen and Albury. Related distantly to the Gehrig wine family, Helm used to pick grapes in Rutherglen and:

“I’d been around vineyards all my life. My great great grandfather, Peter John Frauenfelder, arrived in 1849 to work in J.T. Fallon’s vineyards and his son in law Georg Philipp Heinrich Helm followed him in 1854. Helm was a bricklayer and stonemason.”

Both were German migrants. Albury had a lot of vineyards and a lot of Germans back then.

“Frauenfelder came from Neustadt on the Weinstrasse. He was one of a group of preferential migrants who came out as vinedressers—some of them went to work for the Macarthurs. I’ve been back to Germany many times, twice to judge wine.” 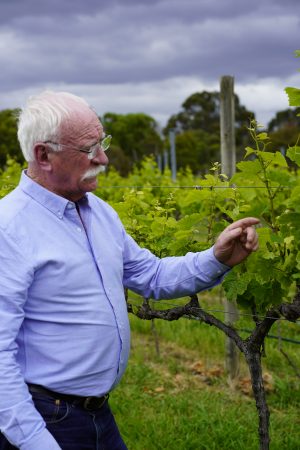 Does he speak Deutsch, then? “Ein bischen! I know enough to get by”.

Chance decreed that it would be quite a few years before Helm began his own wine venture. Meanwhile, he worked for the CSIRO in Canberra, insects being his special area. He helped develop Integrated Pest Management in apple orchards and spent five years working on the vine louse phylloxera. This experience was all useful in vineyards later on.

Although he has no qualification in science, he picked up a lot of chemistry and microbiology along the way. He talked to knowledgeable, helpful people such as the lecturers at Charles Sturt University, Andrew Pirie, Andrew Hood, Andrew Markides; winemakers such as Peter Lehmann and John Charles Brown of Brown Brothers – “A great man and a great friend”.

John Brown and Graham Gregory, then head of the NSW Department of Agriculture, both advised Helm to plant riesling, which has become his calling card. Of course, it resonates with his German ancestry too. So besotted is Helm with the grape that he initiated the Canberra International Riesling Challenge in 2000, which is still going strong and involves entries and judges from Germany alongside the Aussies and other nationalities.

“During my discussions with Graham Gregory, he’d say ‘It’s a cool area, so plant cool-climate varieties’. Müller thurgau and riesling – I still have 50 müller thurgau vines – ‘and there’s this new variety called chardonnay. I’ll send you some cuttings’.”

“Winemaking is easy when you have very high-quality grapes. This region produces great fruit in eight out of 10 vintages.”

Ken Helm AM has been an indefatigable champion for the district, for wine and for riesling. He’s been an energetic lobbyist for small wineries and a member of wine industry organisations. He seems to be always moving forward. He now has not one but two wineries, which seems a luxury for a business producing 5,000 cases of wine a year. The story is that his original winery is now the cabernet winery, and he’s built another one dedicated to riesling. No risk of any cabernet juice getting spilt in the precious riesling, then.

Helm served the district for 12 years on Yass Shire Council including two terms as mayor, which the local graziers must have thought heretical.

“Now they want me to stand for council again this year, but I said ‘No, I’m not a slow learner!’”