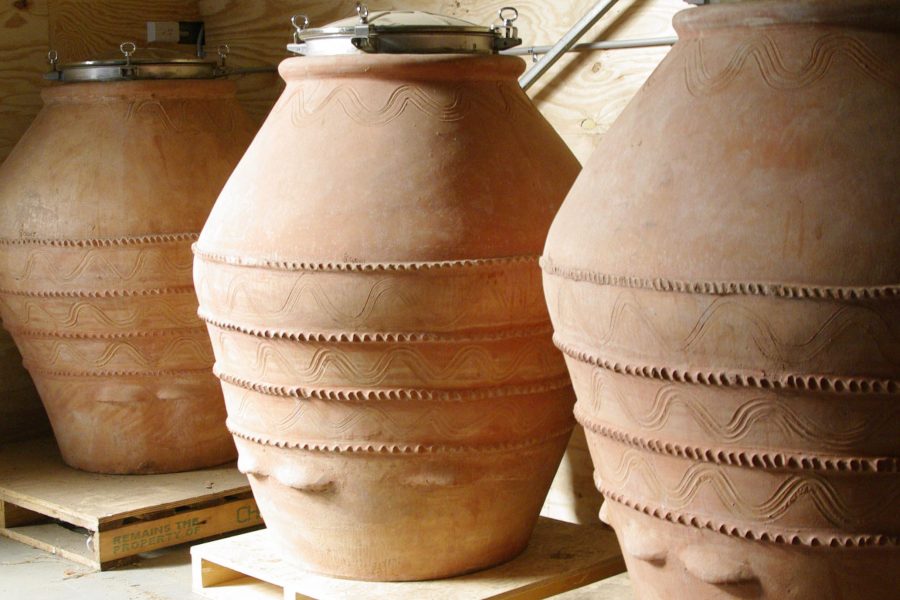 An amphora is a pottery vessel used to transport liquids including wine. They were widely used in the Mediterranean thousands of years ago.

In addition to enhancing winery décor, they offer a porosity that is somewhere between a wooden barrel and stainless steel tank.

Shapes varied considerably but most had two handles, a mouth narrow enough to be stoppered and were tapered at the bottom. A spike at the bottom acted as an extra handle making them easier to manhandle. The inner surface was coated with pine resin to reduce porosity. Amphorae were typically sealed with a clay lid or had a cork pushed into the neck and sealed with mortar.

The term amphora became an expression of capacity in Roman times, about 26 1/7 of a gallon.

Interested in owning an ancient amphora? An Auckland-based dealer in antiquities, Antiquarious, is offering a White Ware Amphora from Cyprus for the comparatively modest price of NZD $1,000. It stands 26cms high and was made around 700 BC,

An increasing number of winemakers around the world are going back to the future and using modern amphorae as a fermentation and/or maturation vessel. In addition to enhancing winery décor, they offer a porosity that is somewhere between a wooden barrel and stainless steel tank. Modern amphorae can be produced with varying porosity, within limits, thanks to high-temperature firing techniques that weren’t available to Greek, Cypriot or Roman winemakers thousands of years ago.

Modern amphorae now boast add-ons such as doors, drain-holes, valves and sample taps. They can limit contact with the yeast lees by having a narrow base or encourage contact with a wider base. It is possible to maximise the local footprint of your amphora by using mixing fragments of soil from your vineyard into the clay used to form your amphora. The Oxford Companion to Wine reports that Château Pontet-Canet mixes fragments of gravel or crushed limestone into the concrete used to produce their amphorae.

My tastings on The Real Review reveals seven New Zealand wines that have been made with the help of an amphora or amphorae.