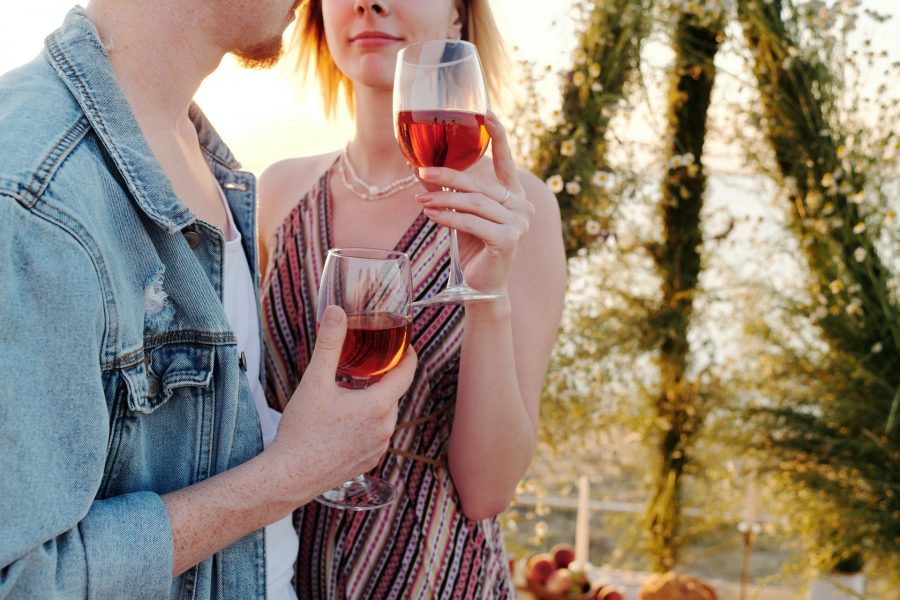 In similar climates around the Mediterranean, rosé was de rigueur on just about every convivial table, so why not in Australia? (Photo: Pexels)

Back in the 1990s, it was a question that perplexed many in the Australian wine scene. “Why don’t we drink more rosé?”

Australia’s climate, ranging from the heat and humidity of the tropics to the temperate conditions of the southern states, was ideal for a fragrant, cold glass of dry, pink wine. Our outdoorsy lifestyle gave it plenty of appeal, and its food-friendly character somewhere between red wine and white lent it to so many of the dishes of the time. In similar climates around the Mediterranean, rosé was de rigueur on just about every convivial table, so why not here?

What these new dry Australian rosés needed, according to Moorfield, was promotion and for wineries to get on board with the style.

The question exercised a small group of lunching wine people in Melbourne on St. Valentine’s Day 1997, a day especially appropriate for a drop of pink wine. Present were wine marketer Elizabeth Woods, wine wholesaler and importer Michael Trembath, and well-known wine entrepreneur Roy Moorfield, and all three of them found common ground in an interest in rosé. Roy Moorfield convened the get-together, and his wealth of experience as a wine merchant gave him unique insight.

With a successful background as a wine retailer and wholesaler, Roy Moorfield tended to look outside the square when it came to the wine scene of the time. He was a pioneer of Australian wine exhibitions and a tireless promoter and commentator on the wine scene. In a period where wine experts recommended gewürztraminer as the only wine suited to Asian cuisine, he championed all sorts of alternatives, exemplified by his “Duck Crawls” through Melbourne’s atmospheric Chinatown.

The Duck Crawl centred on the suitability of the Chinese approach to duck for great pinot noir, and involved a group of diners walking from restaurant to restaurant, enjoying a special duck dish at each place, accompanied by fine Victorian pinot noirs.

Tea-smoked duck, Peking duck, duck with noodles, steamed duck, and many other quacking good creations fuelled the gang and a jolly good time was had by all. Moorfield almost single-handedly changed perceptions of Asian food with wine. Try a Chinese braised beef dish with a peppery shiraz, or a coconutty Malaysian chicken dish with chardonnay to see how it works.

Another area of expertise for Roy Moorfield was rosé. He regularly visited France, in particular Bordeaux, and on one visit he had a lunch at Chez Hortense restaurant on the Atlantic coast with Bordeaux winemakers Sacha Lichine and Alfred Tesseron.

The Frenchmen shared Moorfield’s interest in rosé and brought along portable coolers full of unlabelled samples of rosé to try. The wines were largely saignées made from juice drained off during the making of red Bordeaux. Moorfield was impressed.

“The wines weren’t fluffy, flowery stuff like Mateus which was about the only popular rosé in Australia,” he says. “They were rosés with attitude.”

Subsequently, Sacha Lichine created a “serious” Bordeaux rosé under his famous Château Prieuré-Lichine label, and it inspired Roy Moorfield’s interest. Back in Australia, he consulted to Bannockburn Vineyards, near Geelong, and Yarra Valley winery Yering Station. Pink wines were on Moorfield’s radar, and Bannockurn Saignée, made from pinot noir, arrived as a “rosé with attitude.”

At Yering Station, their international collaboration making high quality sparkling wine from pinot noir and chardonnay with Champagne producer Devaux hatched another Moorfield idea. He suggested that by using light pressings from sparkling production, Yering Station could create another high-quality dry rosé. The wine was called ED (for Extra Dry) Rosé. Some winemakers were cautious about making rosé; others simply ridiculed the idea, but both these new-wave Australian dry rosés enjoyed some immediate success.

What these new dry Australian rosés needed, according to Moorfield, was promotion and for wineries to get on board with the style. He thought these wines made economic sense for wineries too.

“At the time Australian wine was being punished in the marketplace by New Zealand sauvignon blanc,” he recalls.

“Cash flow was a problem for many people. These rosés could go on sale straight away without ageing, in the same way as Kiwi sauvignon blanc, adding a string to the bow, and balancing the business financially.”

Back at that St.Valentine’s Day lunch, Roy Moorfield sounded the others out about an idea he had. While on a visit to Hong Kong, where he consulted to Cathay Pacific Airways on their wine service, he thought there was a need for a movement to get people talking about rosé, buying it, drinking it, making it mainstream. The others had plenty of experience with dry rosé in Europe, and with an eye to Melbourne’s European sensibility, a movement was born.

Rosé consumption is growing everywhere, and this captivating wine style looks set to stay as a vital part of modern Australian wine.

Roy Moorfield called his movement the “Rosé Liberation Army,” with a not-so-serious nod to the revolutionary political movements across the globe at the time. At Hong Kong’s Stanley Market he bought a large lot of pink sunglasses to give people a rose-coloured view of things. He bought a load of Mao caps and took the stars off them, to be replaced with the RLA logo. He also had armbands made to be worn by the faithful. The pink wine movement had arrived, liberation for rosé was at hand.

A decade later De Bortoli joined the fray in promoting “The Rosé Revolution” with a range of new pink wines. Others gradually got on board with an ever-expanding range of wines made from a plethora of different grape varieties. Rosé consumption is growing everywhere, and this captivating wine style looks set to stay as a vital part of modern Australian wine.

About the author Ralph Kyte-Powell

Ralph Kyte-Powell has worked in and around the wine and hospitality industries for over 35 years, and has extensively travelled in Australia’s and the world’s wine regions. He has had a wine column in Melbourne newspaper The Age for 20 years, coauthored the Penguin Good Australian Wine Guide for eight, writes in leading magazines in both Australia and New Zealand, and is a columnist at GoodFood.com.au.