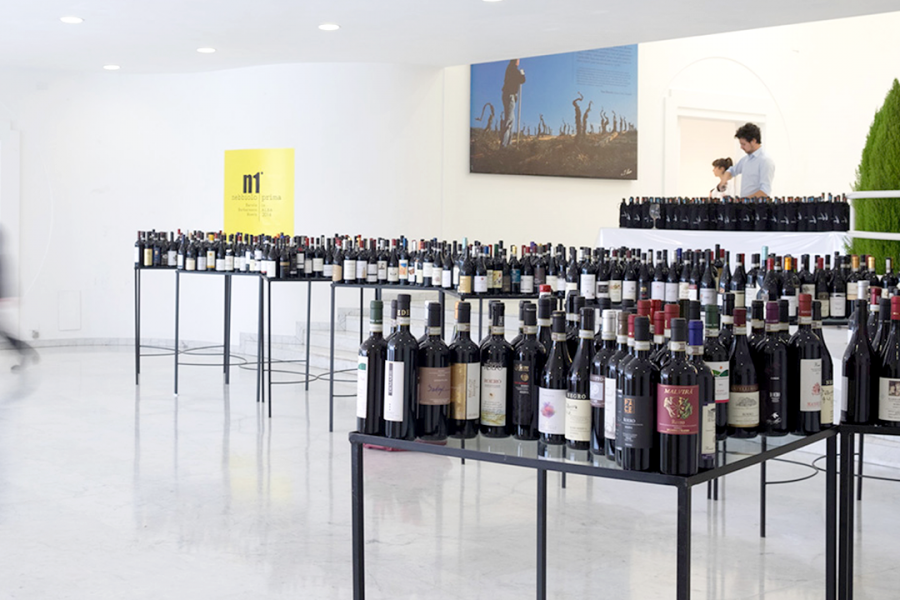 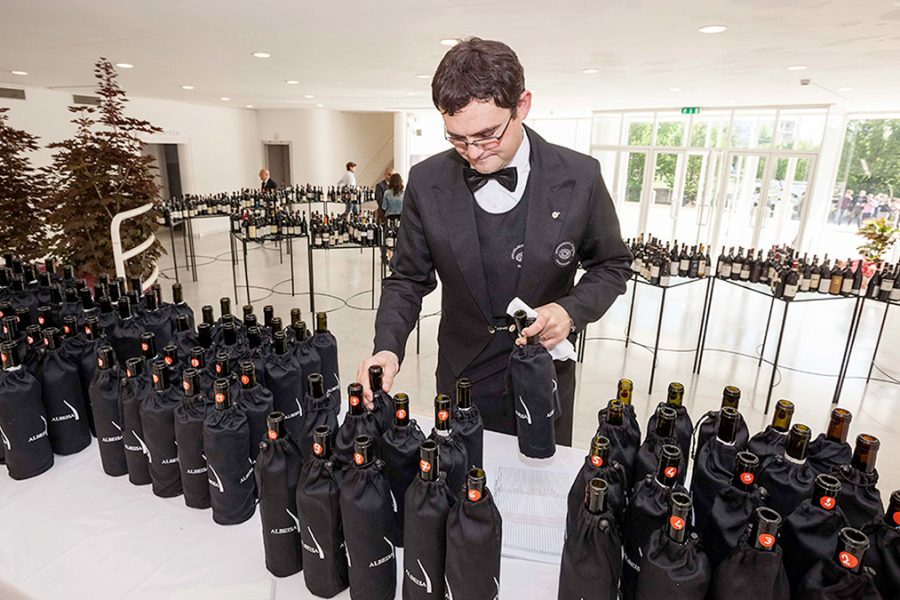 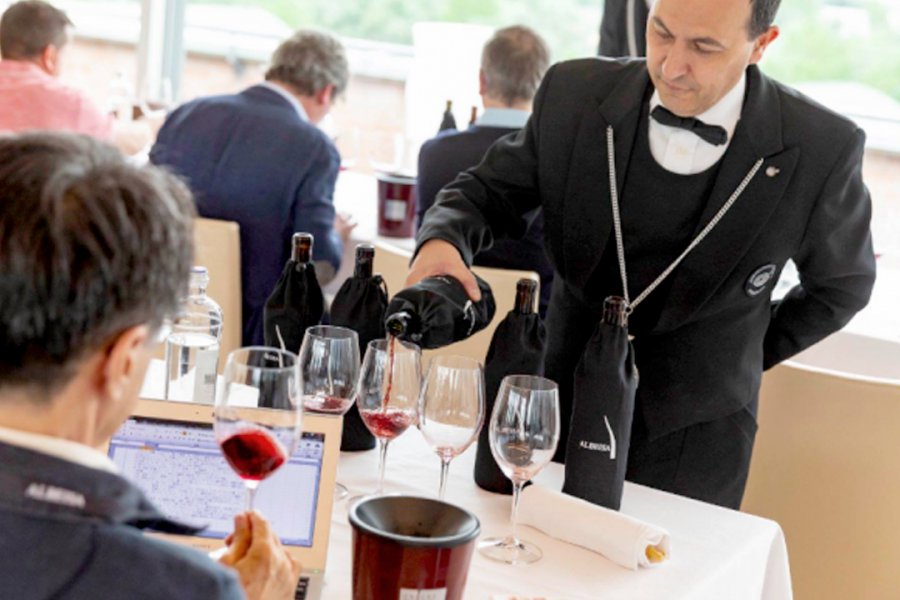 From my seat in the dining room atop Hotel I Castelli in Alba, through the floor to ceiling windows, I can see the tower of Barbaresco in the distance. It is a comforting reminder that, firstly, in a time of constant COVID lockdown there is a beautiful world out there, though it may sometimes be distant and out of reach, and secondly, that I am in the heart of one of the greatest wine-producing regions on the planet.

From my seat, I can also see a long line of anonymous bottles wrapped in black insulated bags, a chalked number the only identifying mark. I am about to start four days of tasting wines made from one grape variety, nebbiolo, and coming from the places most famous for that variety; Barolo, Barbaresco and Roero. This is Nebbiolo Prima, one of the most important wine tasting events in Italy, showcasing the new releases of the region. And I ask myself… how did I get here?

We would maintain a virus-free bubble at the venue, just 4 days of tasting more than 330 wines.

After many years of selling, tasting, writing about, talking about and teaching about wine in Sydney (and, of course, drinking it), the time seemed right for a change. As a tree-change, most people would consider, depending on where you are, going up, down or around the coast. Not us. My wife has family connections in Italy and over the years we have visited the country many times.

By a happy coincidence, those familial ties are in Piemonte, not far from the Langhe hills and the vineyards of Barolo and Barbaresco. And so, in late 2018, a long-held dream somewhat precipitously becoming reality, we bought a traditional farmhouse amongst the vines and a few months later moved to Italy.

The original plan was to set up a sort of bed and breakfast to support ourselves, a locazione turistica, (which we have) and to explore not just Italy, but all of Europe (which we haven’t). COVID put the kibosh on most of those plans.

As we know, Italy was particularly hard-hit. It seems like everyone here knows someone—a family member, a friend (as in our case), a work associate—who has died from the virus. (Australia and New Zealand, aside from the hardships of the strict lockdowns some months ago, please realize how very fortunate you are.) Day to day life has changed, with so many simple things like caffè al banco or travelling between regions off the cards for a very long time. Even visiting the local wineries has been nigh on impossible for most of the last year.

So when the invitation came via The Real Review and Huon Hooke to be involved in Nebbiolo Prima, an event I had long wanted to attend, I jumped at the opportunity. Despite a period of strict lockdown, Albeisa, the union of producers for the region around Alba and organiser of the tasting, was going ahead with a slightly trimmed down version.

Good oak-driven wines can be made but, in my opinion, the best wines invariably display barrel influences merely as seasoning, to enhance aroma and texture.

Just eleven journalists, native-born or foreigners living in Italy, to attend. I was in the right place, just 30 minutes down the road, at the right time. A silver lining on a COVID cloud. We would maintain a virus-free bubble at the venue; no winery or vineyard visits, no wine producer presentations, no gala dinners, just 4 days of tasting more than 330 wines. The long line of bottles beckons and my love and passion for the nebbiolo grape will be challenged.

There’s a fine line between pleasure and pain.

Because the Barbaresco wines are released one year earlier than their Barolo counterparts, Nebbiolo Prima 2021 featured new releases from four different vintages: 2018 Barbaresco and Roero, 2017 Barolo and Roero Riserva, 2016 Barbaresco Riserva, and 2015 Barolo Riserva. Four very fine vintages, each, as you would expect, with their own particular character.

After a long dry spell, the growing season saw more substantial rainfall, which tested growers. Flower set was good and fruit was abundant, many vineyards requiring bunch thinning. A burst of heat from mid-July pushed the ripening along, and harvest occurred in what would be considered classic timing. Indeed, many producers consider this a “classic” vintage, suggestive of a time prior to the noticeable effects of global warming. The sense I have of the vintage is that it is excellent and could be something of a sleeper, possibly similar to 2008.

Despite starting the growing season with late frosts in April, this is a year remembered for its warmth and, above all, dryness. From May onwards, there was a very long period of fine weather with above average daytime temperatures, though the Langhe had cooler nights. The saving grace was some rain early in September along with a drop in temperature, which revived the vines. Harvest was 2 weeks ahead of average. The challenge for producers appears to have been getting the balance of fruit ripeness and tannin structure right. Where they did, the wines show a generosity of fruit combined with the structure to age.

Little needs to be said about this vintage, the descriptive most commonly used being “perfect”. A perfect trouble-free growing season leading to fruit of perfect ripeness, perfect balance and structure, all at slightly lower alcohol levels than has become the norm. Some producers have proclaimed it the greatest vintage of their lifetime. It is most certainly the greatest vintage of this century.

Also regarded as a great vintage, a slightly warmer growing season producing wines expressive in their youth and with the structure to age. Indeed, the opportunity to taste the reserve wines from both the 2015 and 2016 vintages is a rare privilege.

And so to the wines themselves. First, some general observations. A quick review of Huon’s tasting notes from previous visits to this event suggest that, whilst issues such as Brettanomyces, volatility or over-extraction have not totally disappeared, a greater majority of wines are clean and fault-free, better balanced and possibly more approachable in their youth. This may be down to the quality of the particular vintages, or improved practices in the vineyard and winery, or a combination of both. Regardless, it is a pleasing trend, particularly as prices of these wines continue to increase.

Unfortunately, some producers still insist on smothering with oak the very characteristics that make nebbiolo great – its delicate perfume, its nuanced expression of site, and its combination of elegance and power. Yes, good oak-driven wines can be made but, in my opinion, the best wines invariably display barrel influences merely as seasoning, to enhance aroma and texture.

Finally, nearly all of my tasting notes from the event make mention of tannin. It is a hallmark feature of the grape variety and is an essential part of the structure that enables these wines to age gracefully, potentially over decades. Ideally, these tannins should be ripe and silky-fine, coating the mouth with a firm embrace, not thick and coarse and grippy. And not oak-derived. 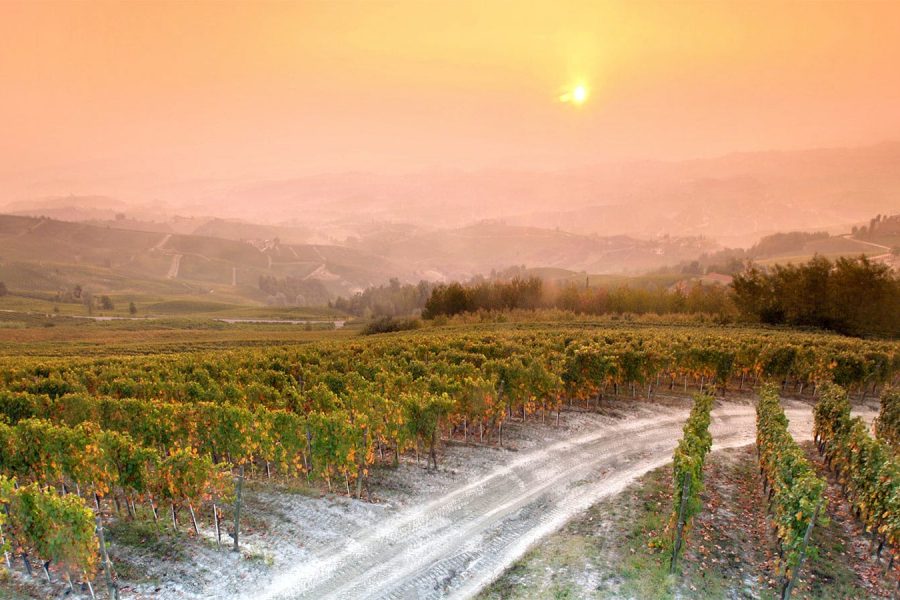 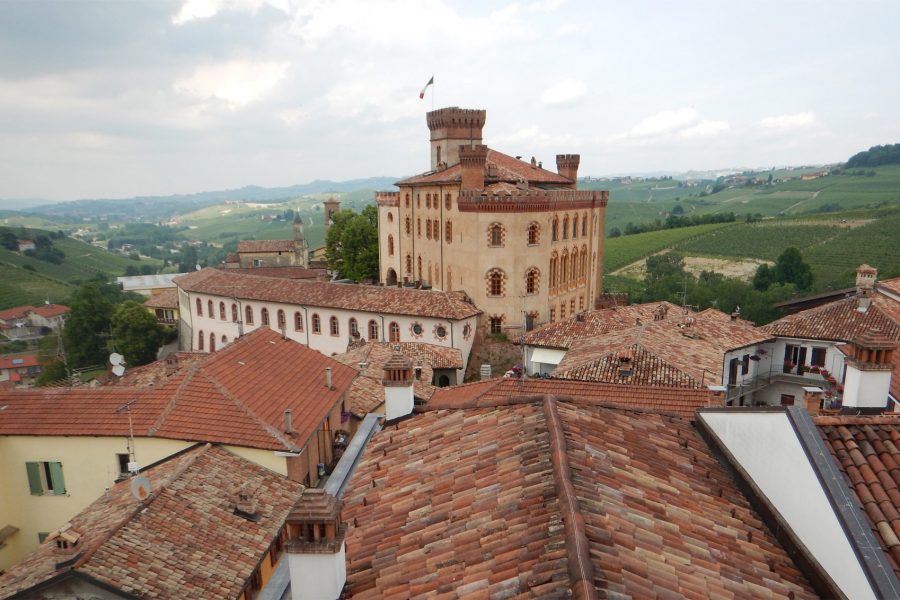 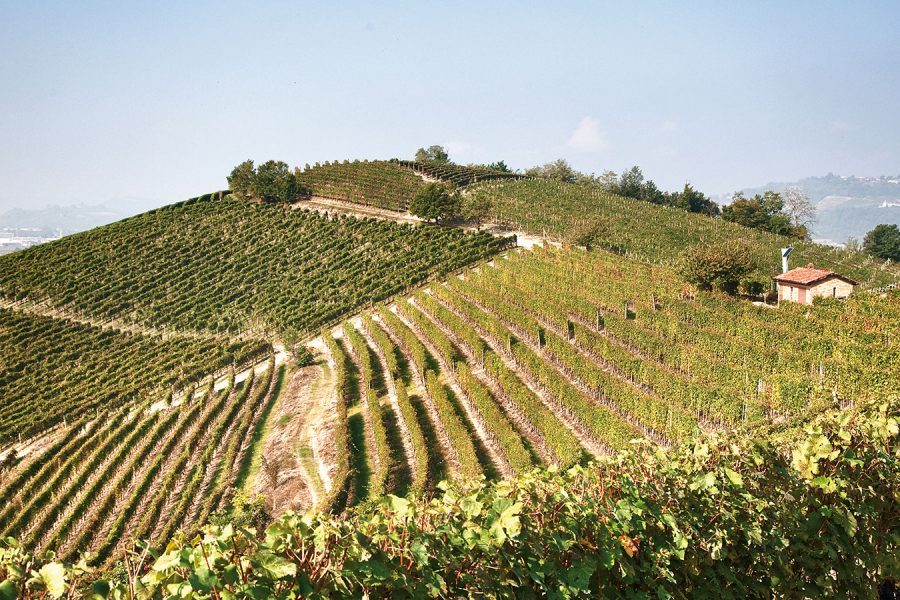 The Roero covers an expansive area to the west and north of Alba and Barbaresco, across the Tanaro River. With sandier soils and a generally lower altitude for the vineyards, the wines never quite have the structure or depth of Barolo or Barbaresco. Mind you, that does not seem to stop some producers from loading up the wines with oak and high extract in an apparent attempt to emulate their brethren across the river. This is often to the detriment of the riserva wines, too many of whom are over-worked.

I would suggest that less is more, that the best examples are the fresher, vibrant styles, celebrating the more delicate and aromatic side of nebbiolo. The best examples from the tasting were Tibaldi Roero Roccapalea 2018, Frea Roero Muschiavin 2018, Pelassa Daniele Roero Riserva Antaniolo 2017, and Deltetto Roero Riserva Braja 2017.

If Barbaresco is the more “feminine” expression of nebbiolo compared to Barolo, then some of these wines are positively Amazonian.

This was a high-quality line-up of wines, with many scoring 95 points or more. Some are certainly more powerfully built than others – if Barbaresco is the more “feminine” expression of nebbiolo compared to Barolo, then some of these wines are positively Amazonian. However the best share in common the qualities of wonderful purity of fruit, finesse and elegance. My top wines are the Musso Barbaresco Rio Sordo and the Cascina Alberta Barbaresco Giacone, although wines from Fontanabianca, Bel Colle, Giuseppe Cortese, Montaribaldi, Massimo Rivetti, Michele Chiarlo, Collina Serragrilli, Rizzi, and Cà del Baio are all superb.

As I have mentioned, though the vintage may be relatively unheralded, all indications are that there are excellent wines to be found.

This was a strong showing for the vintage with 35 wines from 203 scoring 95 points or more. And, what a fascinating exercise to look at these wines comune by comune. Undoubtedly, the strongest performing communes were Serralunga and Monforte d’Alba (particularly from the Bussia vineyard). Even as the wines were poured, their slightly deeper colour marked them as having more intensity and power, the best wines showing exceptional depth and structure without sacrificing elegance.

Look out for, amongst others, wines from Ettore Germano, G.D. Vajra (Baudana), Batasiolo and Mauro Sebaste from Serralunga, and Poderi Colla, Marrone and Podere Luigi Einaudi from Monforte.

The Barolo commune was a mixed bag, the top wine tasted being Vajra’s brilliant Bricco delle Viole (to complete an outstanding double act for the winery) while the Giacomo Borgogno wine from the famous Cannubi vineyard and wines from Casa E. di Mirafiore and Bartolomeo Cavalier also showed exceptionally well. There were also a few wines that were not on-song on the day.

The smaller communes of Novello and Verduno both made excellent cameo performances, particularly with wines from their flagship vineyards. From Novello, the Ravera vineyard wines of Giovanni Abrigo and Giovanni Sordo were superb with their vibrancy and elegance, while the Bel Colle Monvigliero from Verduno is a wonderful example of that vineyard’s beautiful delicacy and finesse.

Castiglione Falletto also provided some highlights, with a lovely Rocche di Castiglione from Fratelli Monchiero and a finely detailed Villero from Boroli shining bright. Throw in a couple of outstanding multi-comune wines as well – Vietti’s Castiglione and the Luigi Oddero classic Barolo.

Probably the only disappointment was the relatively poor showing from a large contingent of wines from La Morra. A number of wines showed faults while others just seemed to have been overworked; this is from the side of the Barolo zone that should be producing the most elegant expressions of the grape. It was left to the venerable Renato Ratti Marcenasca to fly the flag for the commune.

As you would hope for, indeed expect, from two exceptional vintages, there were stellar wines in this line-up. Each of the top wines, scoring 98 points, were impeccable examples of their appellation: the Giuseppe Nada Riserva Casmar 2016 (from the Treiso commune) and Albino Rocca Riserva Ronchi 2016 (from the Barbaresco commune) are Barbaresco of the highest order, while the Giacomo Fenocchio Barolo Riserva Bussia 90 di 2015 is, quite simply, a thing of beauty.

As I drove home at the conclusion of the tasting, my teeth stained licorice and skin peeling from the inside of my cheek, I considered again that line between pleasure and pain. I think I can safely say that the line had not been crossed—my passion for the nebbiolo grape had been tested and, happily, reaffirmed.

About the author Steve Blandford

Steve is an Aussie expat with over 30 years of experience in the wine industry, living in Italy amongst the vines of Barolo in the beautiful hills of the Langhe, Piemonte. He is an AWRI Advanced Wine Assessment Course graduate, two-time finalist of the Vin de Champagne Award, L’Ordre des Coteaux de Champagne member, wine educator and experienced taster, having judged at Boutique Wine Awards and many assessment panels.