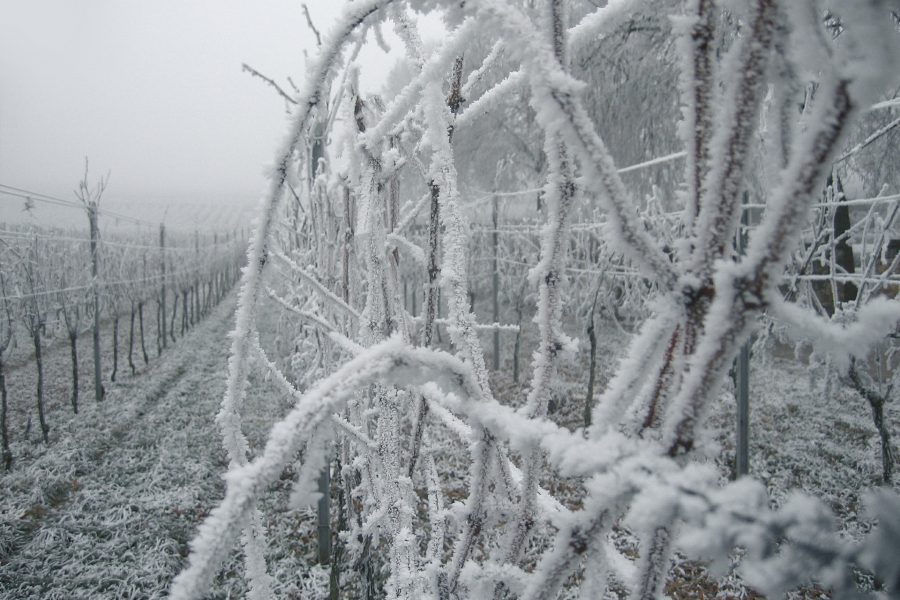 When the air temperature drops below zero degrees Celsius, the dew freezes and you have a white frost. (Photo: Pixabay)

Frost has been much in the news lately, as early spring frosts have decimated vineyards throughout Europe, especially France and the northern half of Italy.

“White frost can cause severe damage, especially if it’s late (in spring) and plants are at a more advanced, thus more fragile, state.” – Sophie Larmandier

As always, vignerons have to wait before they can accurately assess the loss of crop. Vines have an amazing ability to recover, and what looks to be a terribly burnt vineyard at first glance often emerges as less serious damage than it seemed.

Sophie, Pierre and Arthur Larmandier sent out a message to their followers which detailed the event.

On April 6th, it was sunny and summery, which was part of the problem. An early spring meant the vines’ growth had emerged further than usual, making them vulnerable to a spring frost.

All that’s needed then is dry air and a clear sky and frost can happen. It was slightly different on April 6th as the warm weather suddenly gave way to a wintry snow shower at 6pm.

“Then a very cold (about -2°C) night gave very little chance to the delicate small leaves that were only starting to break out.

“Today, we estimate at least 30% damage but, as the buds have yet to develop, we have to wait for a few weeks to be able to assess our losses.

“We are not equipped to fight against frost: our insurance is our 4+ years of stock in the cellar. If such extreme episodes are to happen more often, we will think of protecting ourselves. Indeed, we experience white frost almost every year but this year, as in 2003, the frost is a wintery one: a black frost.”

So, what exactly is a black frost?

“White frost can cause severe damage, especially if it’s late (in spring) and plants are at a more advanced, thus more fragile, state. Still air gets colder through simple radiation (of heat) towards the atmosphere in clear weather.”

From here on, I will paraphrase her words.

Cold air, which is heavier, accumulates at ground level and any lower parts of the landscape. This is when you can get a temperature inversion, as temperatures often remain positive a few metres above ground. This is why you can fight against frost by mixing the positive air at 10 to 12 metres of altitude with the negative air of the lower layer, using helicopters or wind machines. It’s also the reason why you seldom get a freeze during spring, when the air is moving.

So, what is a black frost?

This is a type of frost caused by the arrival of a large mass of cold (below zero degrees) air. The temperature on the ground can drop a few degrees in a matter of minutes.

During a black frost, damage is worsened by the low humidity of the air.

This moving air mass has very low humidity, and the dew-point, which is the point at which moisture condenses out of the moist air, hasn’t yet been reached when the temperature goes below 0°C. There’s no dew on the ground, and the cold air layer can become several metres thick. During a black frost, damage is worsened by the low humidity of the air.

The grape berries—which are more than 90% water at this young stage—lose water through evaporation in this very dry atmosphere. Water changing from its liquid to gas form absorbs a high amount of energy, which produces extra cold—along the same principle as a refrigerator. This makes the fruit temperature even lower than its surrounding air. The gap can be between 2 to 4 degrees. The fruit then drops to -6° to -8°C when the air temperature is -2°C to -4°C.

Black frost doesn’t have a specific colour: it is probably named thus because the dead plant material turns black and brittle as though it has been burnt by fire, which is why farmers refer to their plants having been ‘burnt’ by frost.

Not a happy scenario.