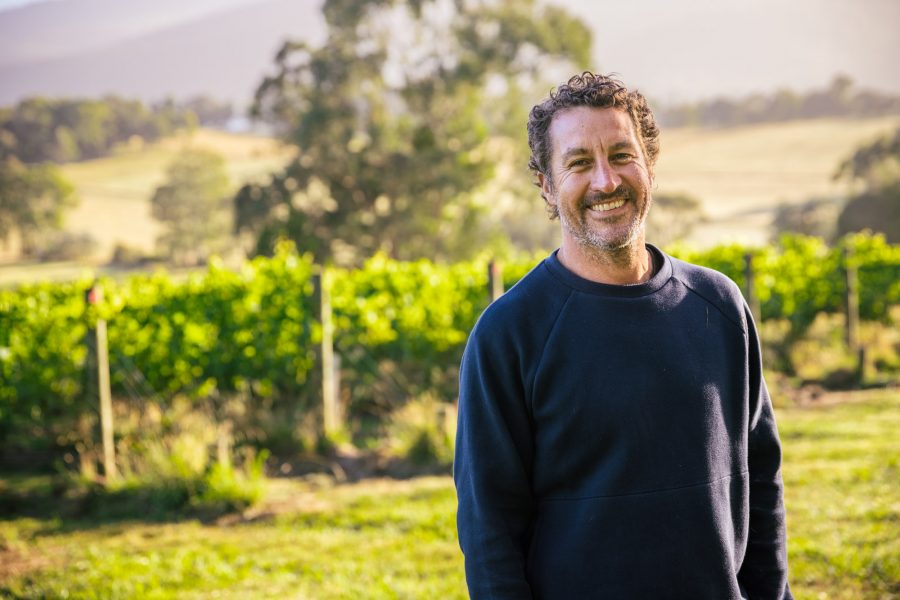 Part and parcel of Mac Forbes’s method is that all of his top vineyards are dry-grown. James Morgan

If you’re concerned about your alcohol intake but you love pinot noir and chardonnay, you need to know about Mac Forbes. He is probably the arch-proponent of low-alcohol wine.

Mac Forbes is releasing his 2019 single-vineyard range, two chardonnays and two pinot noirs, and none is over 11.5% alcohol.

There has been a push in the Yarra Valley for several years towards earlier harvesting and lower alcohol wines, but few push the envelope as far as Forbes.

In fact, he reminds me of the comment the then chairman of Petaluma Len Evans made about chief winemaker Brian Croser when Croser was also embarking on a ‘refinement’ campaign in the 1990s.

“Croser, you’re getting so refined that one day you’re going to disappear altogether,” he spluttered.

Of the two chardonnays, the Spear Gully Vineyard Hoddles Creek wine is the most restrained. It is off the late Dr Tony Jordan’s vineyard, on deep red basalt soil at 300 metres altitude. I’ve tasted few chardonnays that better display what many would term ‘mineral’ nuances. Modern wine tasters rave about the mineral saltiness of such wines, a term I seldom use, but this one reminded me of mineral waters, especially those with a high sodium content. To me, this is neither a positive or negative feature. It just is. And it makes the wine all the more interesting. As well, the wine has a smoky, ‘struck-flint’ aroma. In more than one way, this wine reminds me of a lighter Chablis.

The four wines are all from the higher-altitude end of the Yarra Valley, places such as Gladysdale, Hoddles Creek and Woori Yallock.

Part and parcel of Forbes’s method is that all of his top vineyards (he doesn’t own them but has arrangements with their owners) are dry-grown. He is a firm believer that unwatered vines develop deep root systems, and this gives them better resistance to heavy rain at the wrong time of the season as well as to drought. He’d also like to think the quality is better—but the jury is still out on that question.

The Ferguson Vineyard at Woori Yallock—the source of Forbes’s top-priced pinot and chardonnay—had its water turned off from 2014, and under-vine mulch introduced. This helps preserve the soil moisture and keeps the earth cooler. The last is important. Says Forbes:

“Mulching is not just about soil moisture, it’s also about keeping the root-zone temperature cool.”

I asked him if he has a low-alcohol philosophy? Does he make these wines deliberately? He replied in the negative.

“We never know what the alcohols are till the results come back from the lab.”

There is some opinion that the alcohols are too low, and perhaps some criticism that such low alcohol wines lack the mouth-feel and texture they could have if there was more alcohol. Forbes doesn’t chaptalise (add sugar), although he has experimented with it in the past. He stopped because he felt it was interfering too much with the naturalness of the fruit.

In Burgundy, winemakers traditionally add sugar to the fermenting must in order to boost the alcohol to 13 or 13.5%. Look at any Burgundy label and you’ll see they’re always in the 12.5 to 13.5% range, certainly never as low as 11 or 11.5.

There is no problem with ripeness: the wines don’t taste green. If there is an issue, it’s in mouth-feel or ‘extract’. But even then, the wines are delicious. And there should be a place in the world of fine wine for this style.

Sadly, there isn’t much of them, just two or three barrels of each were made because 2019 was a very low-yielding year.

*The 2019 single-vineyard Mac Forbes wines will be released on May 1st. Trade inquiries to sales@macforbes.com