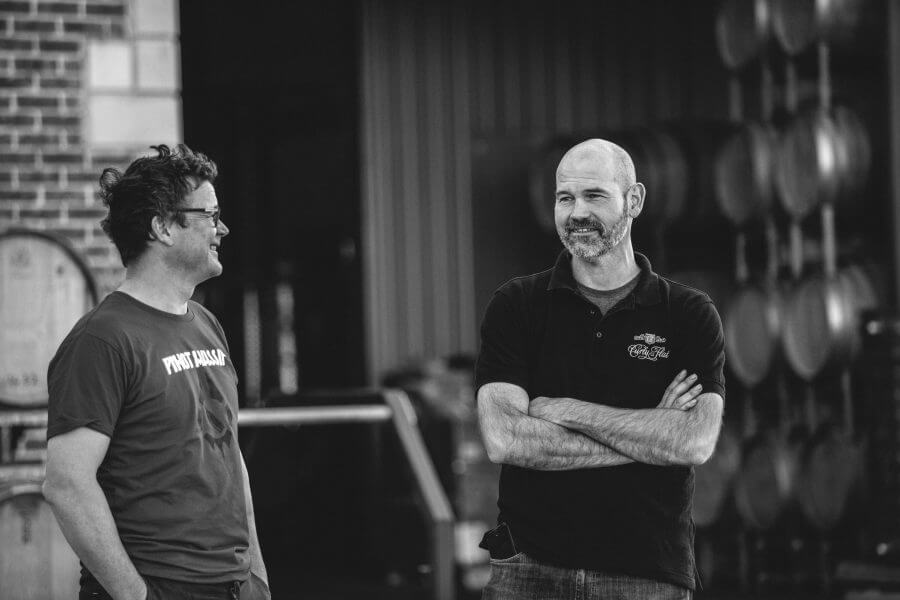 Curly Flat has just released arguably its best-ever wines, a trio of 2018 vintage pinot noirs that are all superb – especially the two single block wines labelled Central and Western.

These are small production (150 dozen) releases from specific parts of the vineyard. As chief winemaker Matt Harrop says, the Central bottling is from the oldest vines, MV6 clone planted in 1992.

The Western bottling is from 1998 plantings on the western boundary.

“It’s the latest ripening block on the farm and typically produces the finer, more supple and aromatic components of the Curly Flat blend.”

The single block wines are being offered to mailing list clients and all three wines are available now.

The 2018 Curly Flat Pinot Noir is the flagship wine and is blended from Central, Western and grapes from the 1995, ’96, ’97 and 2000 plantings. The single block wines are being offered to mailing list clients and all three wines are available now, all priced at AUD $53.

I met with owner Jenifer Kolkka soon after Matt Harrop (ex-Shadowfax) had taken the reins at Curly Flat, and she could not disguise her excitement. Speaking again last week, her enthusiasm for the future of Curly Flat was undiminished.

“Matt is so hands-on, both in the vineyard and the winery,” she enthused.

“He even tops the barrels up with Ben (Kimmorley, assistant winemaker). Every barrel gets that individual attention. We used to always give the pinot noir 20 months in oak, but when Matt took over the 2017 pinot was in barrel, and it was a big vintage so there were a lot of new barrels, and he went through all the barrels and took a lot of the wines out of the new oak and put them in older, neutral oak because it’s a delicate year and he didn’t want the new oak to crush the delicate fruit.”

There will be more individual block bottlings from 2019 and 2020, but not necessarily from the same sections.

“Matt hasn’t selected them yet. But he’s trying to show how there are differences from patch to patch and year to year.”

Another Harrop change has been frost control. Curly Flat has a great supply of water, from a massive 20-megalitre dam (which covers four acres), as well as a bore supplying high-quality water.

Until Harrop arrived, frost was controlled with a sprinkler system, but he discovered that too much water was going into the soil, so he installed frost fans and turned the water off. Then he found that due to soil variation, some parts of the vineyard weren’t getting enough water, so he installed soil moisture probes. Now irrigation is managed specifically for each part of the vineyard.

Another change is with the second label, Williams Crossing.

“We used to treat all of the fruit the same as it came out of the vineyard. The best wine went into Curly Flat, the rest went into Williams Crossing. Matt decided that if it doesn’t make it into Curly Flat it goes into White Pinot (a rosé style), which sells like hot-cakes. No oak. It sells in the year of making so it’s quick turnover and good for cash-flow.”

And the wine is delicious, incidentally.

Harrop, who also owns a vineyard in the Macedon area with his wife Tamara Grischy (head of Langton’s Fine Wine Auctions), started at Curly Flat in October 2017. He finished the 2017 vintage wines and oversaw the bottling of the 2016 pinots, but 2018 was his first complete vintage. And it just happened to be an outstanding year.

One thought on “Curly Flat releases its best-ever pinots”