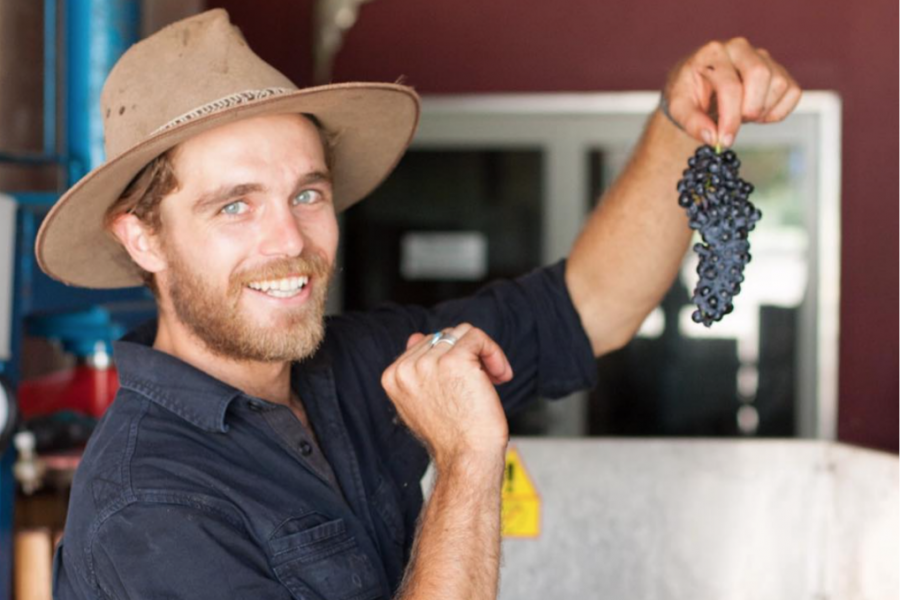 Angus Vinden (pictured), who describes Glen Howard as his mentor, says a lot of winemakers have taken fruit from Somerset over the years. Vinden Estate

The Howard family’s Somerset vineyard in the Hunter Valley evidently had a cracker vintage in 2017. In my recent shiraz tastings, three 2017 wines produced by two younger-generation winemakers scored very highly, and both cited the Somerset vineyard as a grape source. Angus Vinden’s Vinden Estate The Vinden Headcase Single Barrel Shiraz (AUD $60) is Angus’s best barrel of shiraz from that vintage, so production was very limited. And what a wine! Tremendously concentrated red cherry, raspberry fruit flavours of great depth and persistence.

And Gundog Estate Rare Game Shiraz (AUD $60) is deep, rich and lovely with concentrated fruit of a darker style than the Vinden, and embellished with a little charry oak. On his back-label, Gundog’s Matt Burton discloses that the grapes came from the Somerset 1970 plantings and Tinklers’ 48 Block, planted in 1948. It adds a lot to a wine’s ‘story’ when the winemaker tells you what vineyards the grapes came from, especially when the vineyards have history.

The Howard family have been farming in the Hunter for six generations, with 66-year-old Glen Howard in charge today. His vineyard’s low-yielding vines are on classic red volcanic soils in Oakey Creek Road, Pokolbin. The Howards are dedicated growers and have never produced their own wine.

Vinden Estate has another 2017 high-end shiraz called Fountainhead (AUD $60), which is also sourced partly from Somerset. The other component came from the Vinden Estate vineyard, also in Pokolbin.

Angus Vinden, who describes Glen Howard as his mentor, says a lot of winemakers have taken fruit from Somerset over the years, including Len Evans at The Rothbury Estate and later at Tower Estate; Hart & Hunter, Meerea Park, Mistletoe, Keith Tulloch and McGuigan Wines. Glen Howard says he supplied Lindemans for 27 years before it became part of Southcorp.

Somerset has several blocks of vines planted throughout the 1960s and early ‘70s, which are now fully mature and producing high-quality fruit.

Glen Howard says his grandfather’s vines were pulled out during the Depression, when no-one wanted the grapes. Those were vines that had supplied grapes to Maurice O’Shea. Then, in the early 1960s, he and his father Ivan began planting again.

There are now 16 hectares under vine, but there used to be more. As Glen says, during the very wet decade of the 2000s there were five out of seven years when he didn’t pick any red grapes. Wineries rejected them. “I became disillusioned with grape-growing. I wasn’t interested in growing grapes for nothing,” he says, so he pulled out some of his best shiraz vines and turned the land over to growing lucerne for cattle.

He’s very happy with how things are going now, though. His 2017 fiano, under the Hungerford Hill label and made by Bryan Currie, recently won a gold medal at the Italian Varieties Wine Show in the Riverina.

But he is not interested in replacing the vines he pulled out!

“My son is not interested; he’s making good money working in the mines.”

I still have a few treasured bottles of 2000 Tower Estate Hunter Shiraz in my cellar, which was sourced mainly from the Somerset vineyard in Len Evans’s time. It’s a great wine in a fuller-bodied, powerful style, bigger-framed than most Hunter shirazes, and just hitting its peak now at 18 years.

Again, the back-label gives credit to Glen Howard: a great grower and a great terroir.