How John Casella got his big break 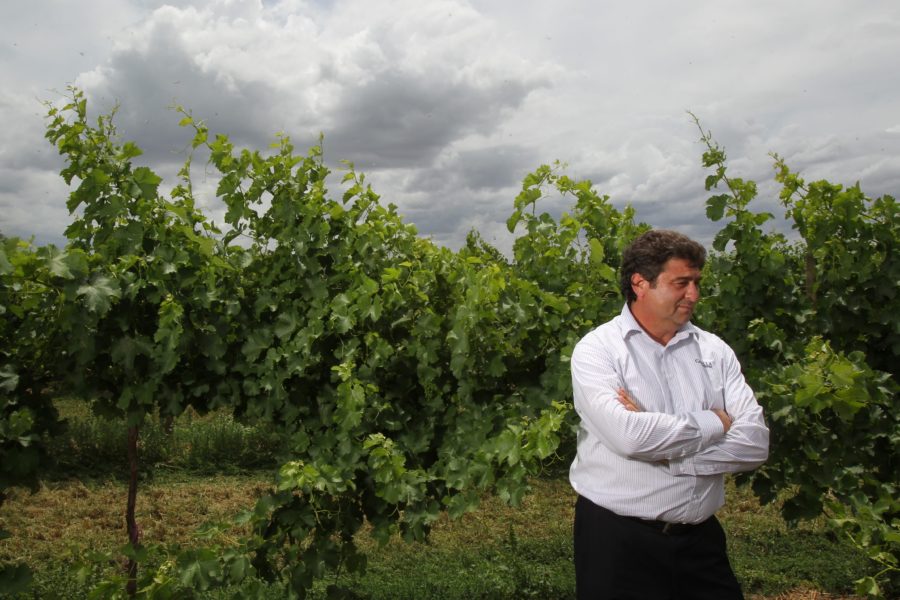 It all started with a wrong number phone call, a call that he shouldn’t have even answered.

John Casella, managing director and proprietor of Australia’s second-biggest wine company, recently told me how he first began dealing in wine, which led to the creation of Yellow Tail and the tearaway international success of the Yellow Tail brand (tastings).

“I was working as the winemaker at Riverina Wines in 1987-8 (as a recent winemaking graduate). I answered the phone when normally somebody else should have been answering it. It wasn’t my job to answer it, but I just happened to be near the phone. And the person who had dialed us made a mistake: he’d dialed 62 41 22 looking for A&G Engineering, a stainless steel fabricating company in Griffith, but he’d dialed 62 14 22, which was Riverina Wines.

I recognised the person on the other end of the line as Frank Bruno from Toorak Wines at Leeton (like Casella, a member of a Sicilian family in a district top-heavy with Calabrians). After asking me how my father was and everything else, he said he had some cabernet for sale and wondered if my father would like to buy it. From there I approached my father and made some phone calls to establish what it was actually worth, then combining Frank’s wine with my father’s we cleared about $70,000. For us, that was a huge amount of money to clear at that time.

I had a rough idea of the value of wine because although I was employed as a winemaker at Riverina Wines, I ended up looking after finance, sales, maintenance – whatever needed to be done, I was involved with. Certainly, selling their bulk wine told me exactly what bulk wine was worth, and at that time it was a booming market leading into the late ‘80s, then there was a big drop leading into ‘90 and then picking up in ’91 as the export boom began its trend.”

After initially having difficulty selling the 1990 vintage, he was then able to sell it, and Casella figured this kind of trading was an easier way to make money than actually making wine ‘which was a lot of hard work and wasn’t making much money’.

“We ended up buying a little farm, which by today’s terms was quite cheap – but wasn’t to us back then.

Then I made wine the next vintage, which I had processed at Toorak Wines because I wanted to make sure what I was doing for myself was distanced from what I was employed to do. That was 1993. Then, after realising I was paying full freight and processing charges I thought why not put a little crusher in at my father’s farm at Yenda? And a little weighbridge. On weekends and in my spare time I could look after my own grapes and I wouldn’t have to send anything over to Toorak or anywhere else. That’s really where Casella and ultimately the Yellow Tail story started from.

My father had been making wine since 1969 but that was just for people he knew – in 200 litre returnable kegs.

If it hadn’t been for me recognizing Frank Bruno’s voice and having a talk with him on the phone that day, none of it might have happened.

It was one little fork in the road, where you don’t realise the importance of it till many years later.

After the 1993 vintage, in August we put a deposit down for our own shed on my father’s farm so we could crush our 1994 vintage. And where we thought that we would crush 700 or 800 tonnes we actually crushed 2000 tonnes. Which was way more than I could hold, so we used the old concrete tanks at Wynvale at Yenda. In 1995, when the region as a whole only processed about 75,000 tonnes, we processed 3,500 tonnes.

We were brought up in tough conditions, the children of immigrants. At the end of the day we didn’t know any better and we just lived within our means, and aspired to do the best we could with what we had. If growing up in relative poverty teachers you one thing, it’s the strength of unity and the strength of family, and still today we are still a family owned business.

Dad (Filippo) was a prisoner of war for several years, a good part of his youth. The interesting thing is that despite missing out on his youth, he never complained: all he could talk about was how keen he was to make a success of his life. Coming to Australia was part of that, and getting involved in winemaking. The good thing is that he got to see the success of what he’d started. He died in 2009, but he’d got to see the success of the family, the success of Yellow Tail, and how important and prestigious the family became in the district he’d settled in.

One thought on “How John Casella got his big break”